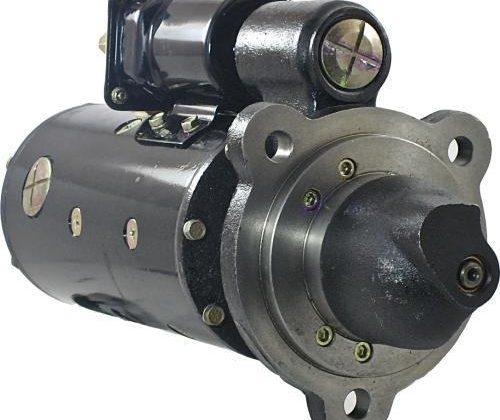 Comments Off on What Types Of Starter Motor Are There?

The majority of modern starter motors are electric.They use an electric motor to turn the engine, allowing it to draw in oxygen and get the internal combustion process going.But things weren’t always this way – and they aren’t universally this way even now.Let’s take a look at some of the different starter-motor technologies on offer.We’ll briefly examine how each of them works, and what advantages they might offer.

When the internal combustion engine was first created, it needed to be turned manually using a handle which you’d have to literally get out of the vehicle to spin.A range of other solutions were also available – like cords and gunpowder.But they all conferred similar problems.

Manually activating an engine was inconvenient, especially when compared with turning a key in a modern vehicle.But it was also highly dangerous, especially when we consider the crudity of the early engines manual systems were designed to turn.If the engine kicked back, for example, then the starter could suddenly spin in the other direction – which, if you were holding a crank to which it was attached, could easily break your wrist.When engines began to develop higher compression ratios, it became even more taxing to turn the engine.

Manual activation hasn’t gone away entirely, however.You’ll find ‘spring’ starters attached to a range of engines, particularly on boats.These work by storing up potential energy in a coiled spring, which when released will turn the pinion which in turn will turn the engine.

In the vast majority of modern automobiles, you’ll find an electric starter motor.This device engages with the engine’s flywheel via a gear called a pinion, which slides in and then out as the engine comes up to speed.Since the current required to turn an engine is so considerable, it would be dangerous to actually have a manual switch complete it.Instead, a special electromagnet called a solenoid is used to complete the circuit, dragging the contacts into place.

In larger gas-turbine and diesel engines, you’ll find a pneumatic self-starter.This uses a tank of compressed air to drive a turbine, which engages the flywheel via a set of reduction gears.In aeroplanes, this compressed air is provided by a special engine known as the auxiliary power unit.

In large trucks, which use air brakes to come to a rapid halt, the system helps to provide compressed air to the brakes, as well.Pneumatic starter motors can deliver a large amount of torque, and they’re a great deal simpler in construction than an electric motor.Consequently, they tend to be a great deal more reliable.If you’re dealing with a very large engine, then an electric system would require a very large storage battery to provide the necessary current.A pneumatic motor eliminates this necessity.

A hydraulic motor can often be found on a large diesel engine.This method of turning the engine is preferred for two reasons.Firstly, it’s entirely spark-less, and secondly, it’s reliable.If you’re ever been unable to turn the engine on your car because the temperature outside is too hot or too cold, then you’ll appreciate how important reliability might be to truckers who have to venture into the middle of Siberia, and then the Persian Gulf.If you’re stuck in the wilderness, you’ll want to be able to turn your engine reliably!

Within a hydraulic starter you’ll find an array of pumps and valves.The starter can be manually recharged, which lends it another advantage over electric motors.In situations where it might be useful to start the engine manually during an emergency, a hydraulic starter-motor is therefore a useful device.

Many modern vehicles come with engines which deactivate automatically when they come to a full stop.This helps to save fuel, and is particularly useful for vehicles which spend a lot of time waiting at traffic lights.One way of starting a car that uses such a system is with fuel-starting, which allows one or two pistons to return to the beginning of their power stroke.Fuel is then injected into the cylinder and ignited.This system relies on the engine stopping in the correct position, and is therefore relatively difficult to implement.

You’ll be able to buy starter motors online, to suit a range of different engines.Whether you’re looking for Audi, Ford or BMW starter motors, you’re sure to find something that meets your needs.

Posted by: Barbara Ratliff
View more posts
How to Get Ready for Counter-Strike: Global Offensive Tournament
Enjoy The Company Of Best High Class Escorts In Chelsea!

The Ultimate Packing List for the Abu Dhabi Grand Prix