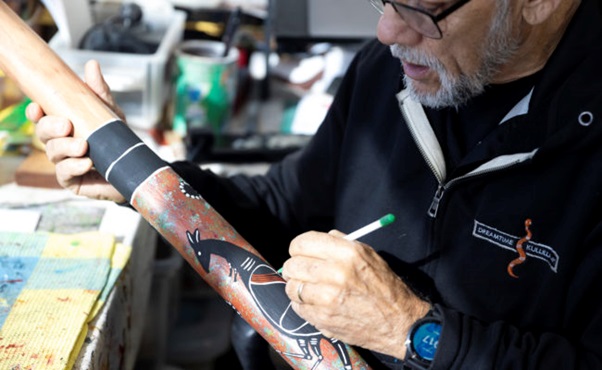 Comments Off on The Place Of Monsters In The Aboriginal Dreamtime

What kinds of monsters exist in Aboriginal Dreamtime lore?

Although they are not necessarily as common in Aboriginal paintings as creatures such as lizards and emus and natural elements like water, air and fire, monsters still play an important part in the Dreamtime, and there are also a significant number of different monsters represented depending on the geographical Australian region. If you were to look into Aboriginal monsters in Australian Central and Western Deserts, you’d find some very interesting examples of monsters that often also appear in western lore, such as Ogres, Bogeymen and Bogey women, alongside more unique things like Cannibal Babies, Giant Baby-Guzzlers, Sorcerers, and spinifex and all sorts of Spirit Beings that prey on unexpecting people. If you were instead to look at the monsters of Australia’s north in Arnhem Land, you may very well find examples of malevolent shades, murderous, bloodthirsty humanoid fish-women, vampiric entities and Spirit Beings that take the form of shooting stars. There are also more examples of sorcerers, with some of the more evil ones relishing any opportunity to dismember anyone who might get too close to their abode.

The function of these monsters in Dreamtime lore

Monsters have long had a very important function in stories, regardless of where they might originate from. Whether it be Satan in Christian lore or the nasty entities that regularly pop up in folktales, monsters have long served as a way to teach and instruct people, particularly children. It is thus interesting that the monsters that we see in Aboriginal Dreamtime lore also resemble the Tricksters, shape-changers and shape-shifters of stories from cultures around the world, demonstrating that human cultures are naturally drawn to these scary creatures as a way of teaching. The many monster examples previously listed in Aboriginal Australian stories are used very effectively by storytellers to share and provide a valuable source of knowledge about the hazards of specific places and environments to ensure that people exercise caution around established dangers. Because these stories are particularly effective in relation to children, it can be understood that imagination plays a far more important role in childhood development than straight-laced information, and this is similarly consistent with other fairy tales told around the world.

Monsters are all around us

The visual depiction of monsters in Aboriginal Australian Dreamtime art serves as an interesting reminder that storytelling as told by humans has a series of very consistent and interesting purposes, regardless of geographic location and time. By instilling fear – and thus caution – in young children, naturally occurring dangers can be far more effectively managed – even if they make going to sleep a bit more difficult sometimes!