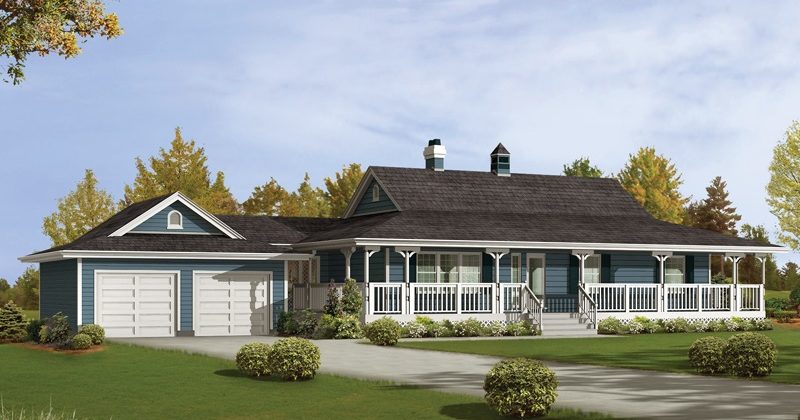 The American Dream comes with a white picket fence, 2.5 children and a dog—but what about the house in the background? Cruising around cul-de-sacs or country roads in America, you’ll notice that there are many classic design styles. These tried-and-true floor plans have made their name in U.S. real estate, and part of the fun of buying or building a home is deciding which one suits your tastes and budget.

Here are six of many popular American home styles to consider for your next abode.

According to Trulia, ranch homes are the most popular type in a whopping 34 states. It’s probably a mix of the simplicity and affordability—the same source reports that ranch homes are approximately half the price of the city’s median listing in Atlanta and 75 percent of the city’s median listing price in Portland. You can recognize a good ol’ ranch home by its single story, open floorplan and layout that resembles a “U” or an “L.”

Craftsman style homes sprung out of the 19th century “Arts and Crafts” movement. It arrived in America (from Britain) in the early 20th century and was wildly popular until ranch homes came along after World War II. Now they’re back to being desirable in today’s market. Craftsman homes usually feature porches with thick columns, low roofs, built-in storage and chimneys.

Farmhouses harken back to the hardworking days of early America. They’re practical, charming and feel homey in a way that only historical homes can. As Realtor Mag outlines, traditional Midwestern farmhouses feature:

While you’re likely not waking up at the crack of dawn to milk cows each morning anymore, you can still enjoy the quaint history by moving into an updated farmhouse. Just remember: You may want to update older systems like plumbing, HVAC and electrical for more reasonable homeowner’s insurance and peace of mind.

Now we head to the East coast for the inspiration behind our next popular style: the Cape Code house. If you’ve ever dreamed of living in a life-sized cottage, this is the floor plan for you. With their steep, gabled roofs, shutters, shingled siding and symmetrical appearance, these charming models of Colonial Revival architecture hold great curb appeal for modern buyers. And don’t worry, you don’t actually have to live on Cape Cod to pull it off; this style is found all over the U.S.

If you ever looked out the car window as a kid and saw a home that made you think that a witch may live there, you likely laid eyes on a Victorian style home. These great wooden masterpieces are tall, narrow and full of intricate flourishes. Owners often adhere to historical guidelines to preserve their integrity and go through great lengths to ensure that the millwork is precise and accurate. Part of the fun of Victorians is that they often get away with color schemes that would be unheard of on more “traditional” homes—bright purples, greens, pinks, reds and yellows, to name a few.

Has all this talk of floor plans made you eager to start looking at real estate listings or poring over floor plans? Once you’ve pinpointed your favorite style and determined what your budget can handle, it’s time to make a move.

Posted by: Barbara Ratliff
View more posts
Best Online Casinos to Play Book Of Ra
How to Make Your Car Ride Safe and Enjoyable for You and Your Dog

Finding the best electric knife sharpener can be a hassle. You are likely to spend…

How to Choose the Best Interior Design Company?

Choosing an Interior Designer could turn out to be quite a daunting task. Since you…

Finding the same old type of furniture wherever you go has become a common sight.…